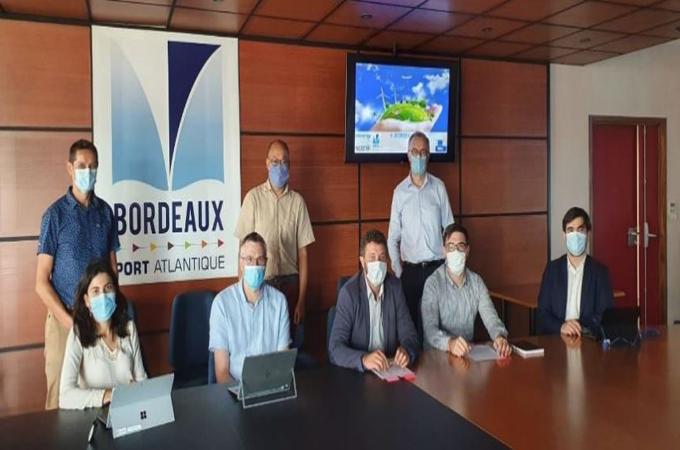 Storengy, the Port of Bordeaux and NEXEYA Supported by the European Commission to Develop the Hydrogen sector in the Bordeaux Region

The project aiming to develop the hydrogen sector at the port of Bordeaux, backed by Storengy,Grand Port Maritime de Bordeaux and NEXEYA, is moving ahead. After the signature of an agreement protocol in January, the initiative H2Bordeaux has won a call for proposals to cofinance the first studies about the use of hydrogen in the port, within the framework of the
European CEF programme (Connecting Europe Facility), which is piloted by the European agency Inea (in charge of the EU’s programmes in the fields of transport, energy and telecommunications).

Kick-off meeting for the H2Bordeaux project on 27 August 2020 - picture credit: GPMB
The project about the use of hydrogen in the Bordeaux area has been selected by the European. Commission among 262 other files submitted thanks to its innovative features and promotion of a worldwide circular economy. This support is reflected by the EU’s funding of 50% of the overall costs of the studies, which amount to 750 k€.

This new stage supports the ambitions of the partnership forged with Nouryon, an industrial company producing sodium chlorate through brine electrolysis from salt imported through the port of Bordeaux, thus generating large quantities of hydrogen. The use of these 3,000 tons of hydrogen produced will accelerate the “greening” of the economy and mobility while structuring a major hydrogen sector in the Nouvelle-Aquitaine region.

The studies led as of September 2020 aim to:
- get to know the potential of hydrogen consumption in the port of Bordeaux for mobility (land
or river) or stationary applications;
- support the development of the hydrogen sector and solution suppliers;
- create a reference project which may be used to duplicate similar projects to other port areas;
- bring forward the conversion and manufacturing of hydrogen vehicles.
This project falls within the hydrogen strategy of the recovery plan announced by the French
government on 8 September 2020, which aims to decarbonise the industry and mobility. Beyond Nouvelle-Aquitaine, it will contribute to the creation of a hydrogen sector in France and Europe.