Our expertise in geothermal energy

We are pioneers in the development of centralised and decentralised geothermal solutions. 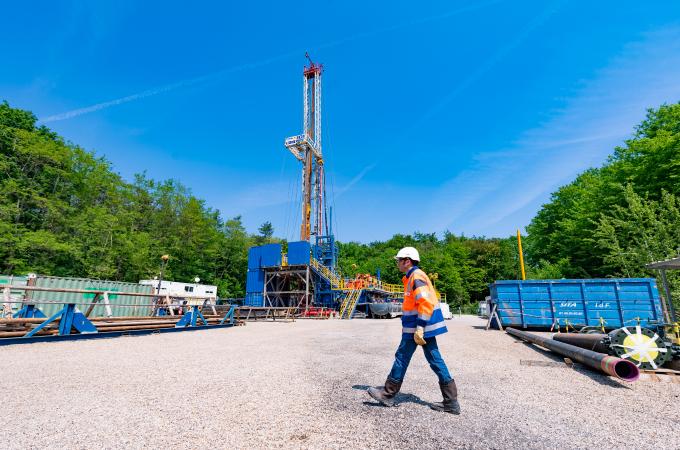 We are developing many ambitious projects in our three principal areas of expertise: geothermal energy for buildings and eco-districts, heating and cooling networks, and electricity production.

Geothermal energy for buildings and eco-districts

Buildings, campuses, eco-neighbourhoods: here are some of our projects to supply heating and cooling to small facilities.

ENGIE and its partner NEXITY are launching the construction of the Group's new headquarters in La Garenne-Colombes (Hauts-de-Seine) at the end of 2020, known as "the Campus".

The new ENGIE campus will be powered by a 100% renewable "smart geothermal" solution. This innovative solution, designed entirely by Storengy and ENGIE Solutions teams, will be implemented for the first time in France on a project of this scale.

Storengy has signed a contract with ENGIE Solutions for the design and implementation of the geothermal solution for the new Campus: the buildings will be heated and cooled by a geothermal system, supported on the one hand by a biogas-fired boiler, and on the other hand by cooling units powered by electricity generated by photovoltaic panels for the cooling needs.

This innovative system can be used in many urban projects.

Storengy has been chosen by Agronergy to implement a new very low-energy geothermal solution (on groundwater). Agronergy is the energy supplier that is designing and operating the heating network to supply a new eco-neighbourhood of about 100 homes in Versailles (Terres de Versailles).

Agronergy was convinced by Storengy's solution thanks to its expertise in the underground world and in extremely low energy geothermal energy in particular.

On this project, Storengy will carry out the future drilling (a test drilling has already taken place) and the feasibility study.

The "Cœur d'Issy" project is a very low-energy geothermal project (on groundwater) for the creation of an eco-district (on the site of the former CNET site in Issy les Moulineaux).

Storengy is involved in the drilling/wells and primary loop equipment, and ENGIE Solutions in the boiler room.

This district will be supplied with heating and cooling, mainly produced from geothermal energy on groundwater with a common water loop for the entire site. This solution will make it possible to pool the heating and cooling needs of the various office, retail and residential units by recovering energy between units when some units require cooling while others require heating.

This is an extremely low energy geothermal project (on probes).

Grand Paris Sud Est Avenir (GPSEA) has selected Storengy, following a public tender, to carry out a feasibility study on geothermal energy on probes for heating and cooling the Maison de la Nature in Périgny-sur-Yerres (94).

The geothermal solution on probes chosen will allow to supply the 884 m² of the Maison de la Nature with renewable, local and non-intermittent energy.

A feasibility study was carried out to determine the location of the test borehole, which will be drilled in 2020.

The construction site, which will be supervised by Storengy, will begin in 2021.

Storengy and the City of Annecy have signed a partnership agreement to enhance geothermal energy and develop new associated concepts.

The project deals with the improvement of the existing energy system at the ”Equipement pour l'enfance Vallin-Fier“. It combines geothermal and solar thermal energy and will serve as a demonstrator for other existing and future building programmes.

The ”Vallin-Fier“ complex, which includes a primary school, a nursery school, a gymnasium and a day-care centre, was initially equipped with a geothermal installation consisting of 18 vertical geothermal probes and a heat pump. To optimise the performance of the installation (summer/winter alternation), the city of Annecy and Storengy worked to find a sustainable energy solution to meet heating needs.

The project involves installing thermal solar panels on the roof of the building to capture heat in the summer, which will be stored underground and then used in the winter to heat the building. This additional heat will complement the heat produced during the summer when the sensor system is used to cool the buildings.

At the same time, two underground temperature measurement probes will be installed in the underground (approximately -130 metres) to monitor its temperature and measure the efficiency of the coupling in real time, a first in France.

Storengy will support the City of Annecy by providing its recognised expertise in the field of geosciences and energy production engineering with a view to deploying coupled geo-energy solutions.

The University of Savoie Mont-Blanc, which is at the forefront of solar thermal energy, will also be associated with this project, as will ADEME.

In January 2017, Storengy and ENSEGID signed a partnership agreement to collaborate on innovative geothermal and seasonal energy storage projects such as:

We work with cities, recreation centres and industrial sites to provide heating and cooling to large areas.

Arcueil-Gentilly in association with ENGIE Solutions

In 2013, ENGIE Solutions won an invitation to tender to design, build and operate a new heating network in the Arcueil-Gentilly municipalities in the Paris region, as part of a public service delegation.

Storengy is the prime contractor for the drilling of the geothermal doublet.

Since 2015, Storengy has partnered with ENGIE Solutions and an investment fund to design, build, finance and operate the geothermal heating network for the new Villages Nature Park and Disneyland® Paris. The operating concession is valid for 25 years for assistance to the project owner (underground) in the context of a private investment project led by Disneyland® and Pierre & Vacances Center Parcs.

In 2017, Bordeaux Metropole selected ENGIE's bid, supported by Storengy and ENGIE Solutions, to design, build and operate a new heating network in the heart of Bordeaux, as part of a 30-year public service delegation.

This operation is emblematic because it includes, on the one hand, the exploration of a deep reservoir (Jurassic) and, on the other hand, the deployment of the first geothermal doublet in the Aquitaine region.

Decarbonisation project of the city of Helsinki

HIVE is a team that brings together various partners, such as ENGIE, its subsidiary Storengy, ENGIE LAB CRIGEN, TRACTEBEL, NEWHEAT, SAVOSOLAR, PLANENERGI and AEE INTEC.

The solution presented by the HIVE team was selected by the City of Helsinki in March 2021 as the most effective solution to decarbonise its heating network by 2035.

In this context, Storengy will be in charge of managing major heating networks built on the BTES model (Borehole Thermal Energy Storage), which is an essential part of the system planned for the Finnish capital.

The other players in the project :

We work with electricity producers and companies to supply networks with renewable electricity.

Storengy brings its expertise to ENGIE Group projects in Indonesia and is involved in the qualification and development phases of the geothermal resource.

Since the end of 2019, ENGIE has been operating a first 85 MW power plant in Muara Laboh via a consortium of three companies (Sumitomo Corporation, PT Supreme Energy and ENGIE).

The second power plant, in Rantau Dedap, is currently under construction and is expected to be commissioned during 2021.

In June 2017, Storengy and TLS Geothermics signed a partnership agreement in the field of High Temperature geothermal energy.

This agreement allows for collaboration on R&D topics aimed at:

Storengy and Reykjavik Geothermal are cooperating on geothermal projects in Mexico to supply electricity to a growing Mexican market. They are currently working to develop a portfolio of 3 exploration licenses in the states of Puebla and Nayarit.